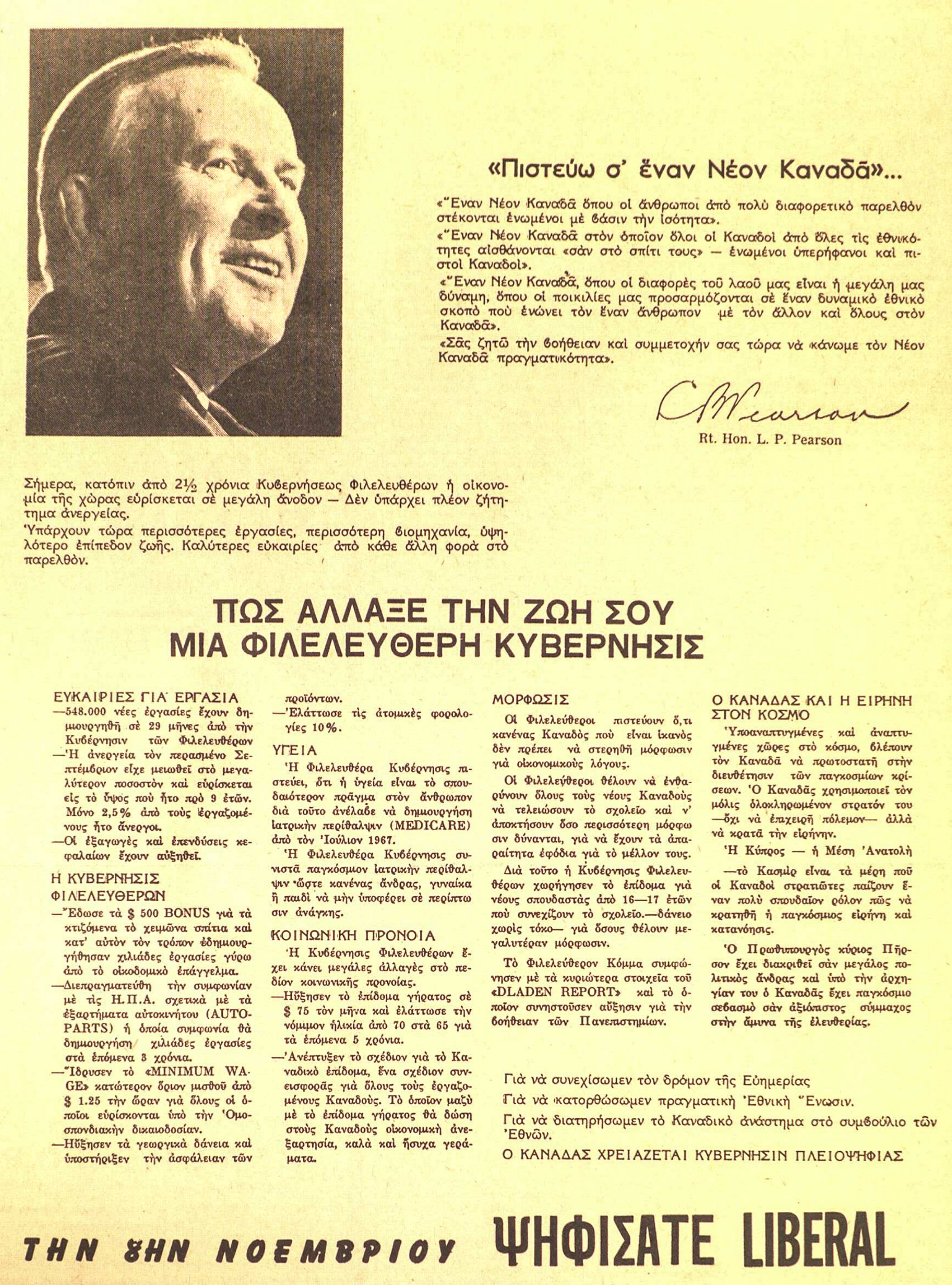 The Liberals’ club and the English language

A man talks about his participation in the Liberals’ youth club.

Α.P.: And myself, I happened in the job that I had, there was a young guy who was born here, his parents from the Peloponnese and we went to the church of course, he took me to the youth and “In order to learn English” he says to me “I’ll get you registered at a club”. “What club?” I say to him. “A political club”. “Ah, it has to be to my liking” I say to him. He says to me “Which one? What do you want? What do you fancy?”. “Nothing”. But I had read about Lester B. Pearson though, who was General Secretary of the United Nations and who had become, he was in the Liberal Party and he was Minister of Foreign Affairs. My father had met Wilfred Laurier, a very reputable Prime Minister, French, the first French Prime Minister, who had correspondence in the old years with my father and I say… he took me to someone and he tells me “This party is the Liberal one”, I say to him “Are you kidding me?”, “No, this is it”.
RES.: Ah, you were used to the names in the…
Α.P.: I mentioned those names to him, in the meantime, eh, my father used to tell me, he always talked about the Liberal party, about Laurier, who was a moderate, of the center, he was.
RES.: These then, let’s say, corresponded, as regards to Greece, to those years, something like the… how Sophocles Venizelos was…
Α.P.: Like the Venizelist, yes, yes, Venizelos…
RES.: After the war, when the Liberals were.
Α.P.: Yes, yes, yes.
RES.: Yes, ok.
Α.P.: Yes, this. So, and that young guy was making fun of me and he took me and we went to see a meeting in another and I look up, it said ‘Conservative’. “This isn’t Liberal” I say to him. “Eh, leave it” he says to me. “We’ll go to the Liberal too” I say to him “It’s not Liberal, is it Liberal?” “No, alright” I say to him “It’s nice here, alright, but you’ll take me to another club”. And he took me to the... youth as well.
RES.: Of the Liberal finally?
Α.P.: Yes, of the Liberal. “You’ll be going for walks” he says, “All the youths are little children” he says “And… from fifteen” he says to me “Up to twenty-five and you’ll be going for walks, here, there, you’ll… in terms of language, you’ll be able to get used to speak better…” Alright, like that, like that it started, let’s say, this… this place and so, I was there and then I joined the youth of the community.
Current place of settlement:
Vancouver