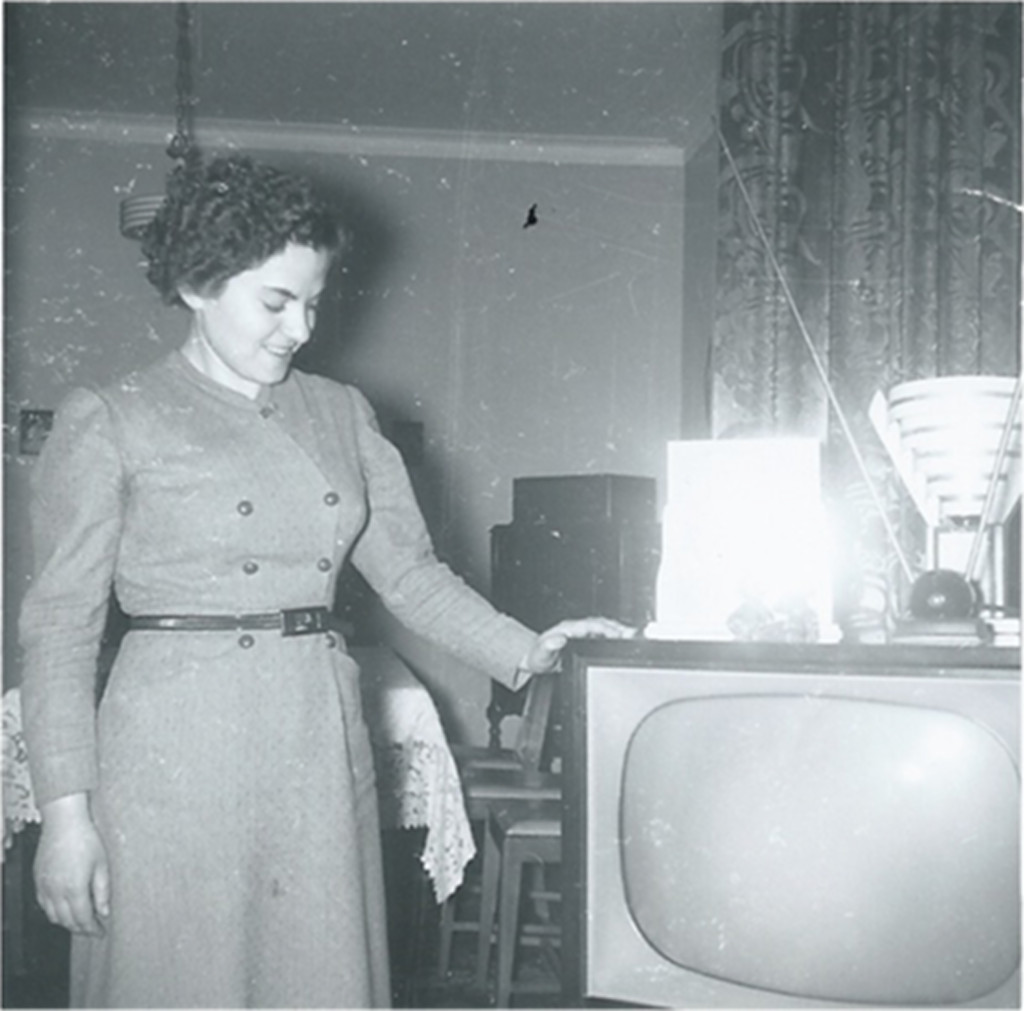 Posing with the television
Woman posing next to the TV set, from the personal archive of Angie Tzouvelakos.
Source: Immigrec

Man mentions how the entertainment of the Greeks was organized in Winnipeg by watching Greek TV programs.

RES.: We’re now at the point where you’re starting with the…
D.Α.: We started the radio station in ’67. In ’68 we’re starting the first Greek television in the whole world, there was no television in Greece yet.
RES.: Good, so tell me a bit… do you remember how... how... how it was called?
D.Α.: Ah, ‘Greek voice’.
RES.: Greek... both of them were called ‘Greek voice’?
D.Α.: Yes, yes, both of them, ‘Greek voice’, yes.
RES.: And the radio…
D.Α.: ‘Greek voice’ television the first in the world, meaning there was no antenna in Greece yet to broadcast on air, TV yet, I mean Papadopoulos didn’t… Papadopoulos did it… The dictatorship did this after ’68 and between ’69 I believe…
RES.: Who established the YENED.
D.Α.: We were the first, in America there was no radio, television, there wasn’t, there were radio stations, but not Greek television. And, what were we to include? Since we managed to get the station and they were giving us time and they could with the antenna, watch Greek television and later with cable television, that cable television became available.
RES.: Cable, yes.
D.Α.: But in the beginning on air. What must we include? The consul of Winnipeg was a lawyer, born in Winnipeg, but he also… he also served as consul, the Greek consul who wasn’t getting paid, he was a volunteer.
RES.: Ah, the honorary as we say, yes.
D.Α.: Yes, and his name was ‘Merkouris’. (Over he’s there first day)? Eh, eh, eh! “What do you want?”, he says. I say “This and that”. “We opened radio… television station now, we’ve got the radio…”. He says “Yes, I’m listening to it as well…”, he tells me, “The radio, very nice”. A very nice thing it is. We now have radio, to put on in the car the radio with Greek and music, eh? “However…”, he says, “Television”, he says, “You were the first to start a television…” and we respond “We don’t have material, we don’t have material”. And the consul says, Merkouris, Mr. Merkouris -a very decent man let’s say- he says “l’ll have a talk with the ambassador in Ottawa, the ambassador, the Greek ambassador and we’ll get in touch with you…”, he says, “Tomorrow, the day after tomorrow about what he’s going to respond”. He informs us the next day and tells us “Come to my office”. We go to his office once again, and he tells us, “We’ve got good news, the ambassador guarantees that you’ll be receiving the films from Greece… films! Films! Films, the rolls, eh? With money from Greece, pay. “The only thing you’ll be doing, you’ll be putting them on to play, eh?” At cinemas, because we also played at cinemas, the films and from there to the television. However, the ambassador told us this through the consul, to guarantee that, “All the advertisements which Greece will be sending us, you’re obligated to include in the television and at the cinema”. Meaning, you know the… the propagandistic, how to say? Those being made… the projects which were being made in Greece.
D.Α.: And because many Greeks didn’t want to watch those, airports, schools, gymnasiums, universities, whatever they’re called, those the government is doing, a government…
RES.: I understand.
D.Α.: And we promised that since they’ll be…
RES.: Ah, so you played that which we call the topical?
D.Α.: He said along with the films to show these.
RES.: Alright, ok, yes.
Informant:
Angelatos Dimitrios
Place of origin / residence:
Andriolata, Cephalonia, Heptanesia
Current place of settlement:
Vancouver