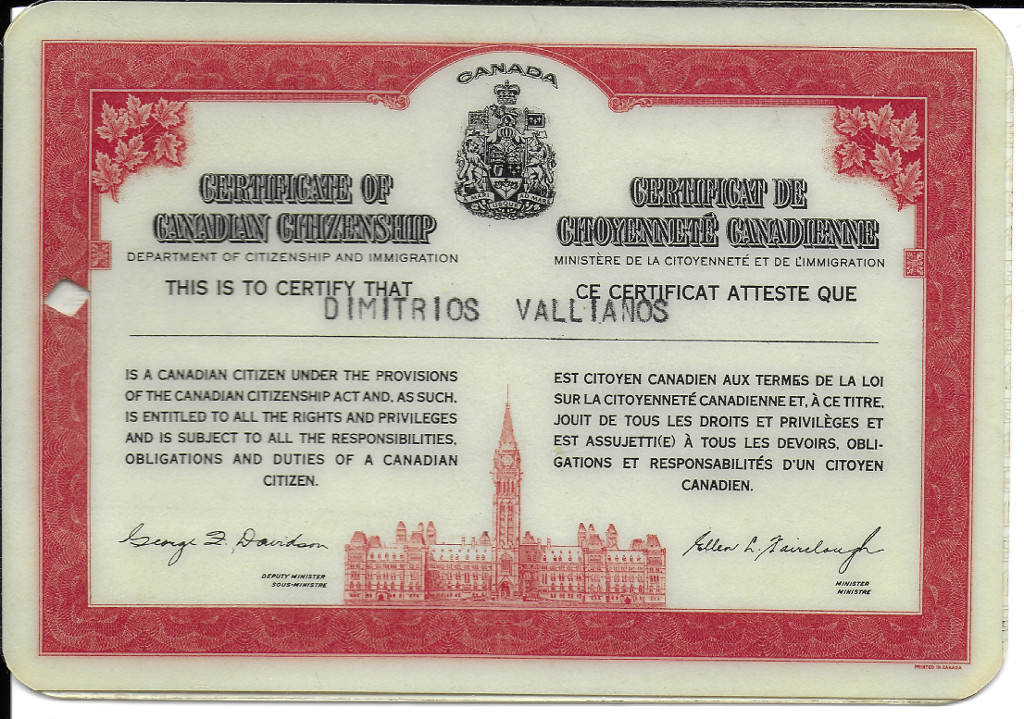 A man refers to his taking the oath as a Canadian citizen.

AN.: I received the Canadian citizen card too, Canadian citizen and I could now work fearlessly, without being afraid and so on. But until then, I can say I had been lucky. I had been lucky too that they didn’t ship me back to Greece again, because at the time there persisted this fear and at the restaurant, we were almost five-six illegal persons then. Sure. We were five-six persons. Back then the fear was great lest some disturbance should take place, somebody should involve us unwillingly, whether this, whether that… There persisted this fear too of course. That’s it.
RES.: Could you tell me how did you go to immigration? Did you decide this yourselves?
AN.: To?
RES.: To immigration office, to become…
AN.: For immigrant? We had gone… when did we go? Ah… we had gone along with my brother-in-law the first time, but the second one though we went along with a group in which they knew better than myself. Yes. We went, they asked us some questions, the first question was which… which… the mountains. I said, I knew the XXX, I said those. They asked me about rivers, I knew the longest one, Mackenzie River they called it, I said it, he says to me alright. What is the capital, I say Ottawa. These we knew, the easier ones let’s say. Eh, they didn’t ask difficult questions and so on. Alright he says to me, bravo and so on, then we all took the oath together, as if we understood the oath? But yes, somehow, we repeated ourselves too, without knowing, of course, to speak the truth. Eh, finally everything went smoothly, nice. We also received the card after a week, they sent the card home, to my address and so on. And then fearlessly we were going to work without XXX, without anxiety and so on. Yes. This was it and I can say to you, we are grateful to Canada and to the late XXX, who himself was the first to pass this law. This action, let’s say, was the Prime Minister’s and bravo to him and sometimes we… many times, that is, we are grateful to him. Eh, these are the most magnificent, the most important, to put it like that.
RES.: May I ask, have you learned any English or French?
AN.: English and French unfortunately I didn’t learn. Very, very little, very, very poor I should say, because all those years I had been working with Greeks and I always used Greek. Very rarely, let’s say.
Informant:
Anonymous
Place of origin / residence:
Lefkada
Current place of settlement:
Montreal